Our district is at the Orange setting of the new traffic light system (COVID-19 Protection Framework). Council offices and facilities are open. Please wear face coverings when visiting our facilities. 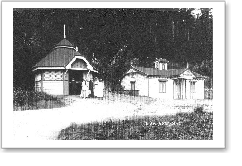 The idea of a health spa (or sanitorium) being developed at Te Aroha was envisaged as early as the 1870s, when regular excursions began from Thames to Te Aroha by boat so that visitors could take advantage of the hot springs.

The construction of the first permanent Bath Houses began in 1883. By this time the hot springs were becoming well known as a tourist resort. The railway from Hamilton to Te Aroha was opened in March 1886 completing the link from Auckland and greatly increasing its accessibility and popularity for visitors.

The town of Te Aroha was developing rapidly around this increase in visitors who came to “to partake of the remedial waters, both by bathing and by bottle”. The waters claimed to cure many common ailments such as Rheumatism, Arthritis, and Gout. Eventually advances in medical science saw a discrediting and loss of faith in ‘scientific baleanology’, and changing fashions saw the concept of the fashionable spa fall out of favour. People still continued to use the baths, with more emphasis on casual enjoyment than the more formal ‘taking of the waters’.

The current Te Aroha Mineral Spas are located on the site of the Original No 1 Bath House. The building was designed and built in the Edwardian character to preserve and enhance the heritage character of the Te Aroha Domain as an Edwardian Spa resort.

Visit the Te Aroha Mineral Spas website for hours and to find out more.